at the three mills of Skerries. Kate will help to launch the third Fingal Poetry Festival on Thursday 15th September with Irish poets, film-makers and performers. She is the guest of its Artistic Director, Enda Coyle-Greene. They met at Poetry on The Lake in Italy many Autumns ago. This event will be a real reward for the two years of lockdown we’ve endured, during which time Kate sent a film-poem for the Festival 2021. Now invited to appear and read it again in person! Thank you as ever to the patrons.

Jack Trewin and I are delighted with our first film festival selection. ” As Windmills Did” ( originally for the Fingal Poetry Festival 2021) has been selected for the new Danish festival, Uninhabited, which runs in June 2022 in Copenhagen.

Kate has been commissioned to write and record a new film-poem with Jack Trewin to help launch the 2021 Fingal Poetry Festival on 16 September. Watch now on Youtube, click on the Fingal Poetry Festival link. In it she celebrates windmills and other working buildings in the landscape. Despite the fact that they are often neglected after they become redundant, there is a gaunt magnetism about them. Fingal Poetry Festival takes place at Skerries where there are three remarkable mills, two in working order and a third, the Small Mill, once thatched and diminutive, said to have been built following the example of mills seen on the Crusades.

Recently she talked with Tim Relf for the magazine Country Life on the subject of writing on the countryside, about the abiding influence of early twentieth century poet and journalist Edward Thomas and the renewed interest, during lockdowns of 2020 and 2021, in poetry that observes and records farming and rural life. This issue will mark National Poetry Day which this year falls on October 1.

On 1st February 2021, Youtube admits you to launch night of Kate’s reading and interview with Simon Trewin, recorded on 23 September 2020, thanks to the unflagging work of the small team at Carcanet Press.

Poetry Review, the British quarterly, included a fantastic review of the book by Sarah-Jean Zubair in their Winter 2020 volume 110:4.

‘Haunting’, wrote one watcher of her film-poem “The Queen of Naples, asked about her Childhood Home“. New commissions for film-poems are in the pipeline, so too are opportunities to connect across site specific and cross-disciplinary networks with CollectIvel (linking music with English rivers) and in Dublin, Poetry at Skerries Mills (linking windmills and perhaps granaries, oast houses, and other tall structures in the landscape).

This year’s Waterloo Festival (on the theme of Respair) revisits the Festival of Britain (1951) a favourite subject of Kate’s. As a student at St Martin’s she cycled up and down the South Bank with her first mobile site specific sculpture that recalled the Skylon. So long ago that she doesn’t have a digital photo.

While movement was still restricted in June 2020, Kate and the artist Jack Trewin began a second collaboration at a distance. The result, based on another poem from The Long Beds is an audio-video collage even more visually layered than Keepers of the States of Sleep and Wakefulness, their first joint venture which recently charmed a wide audience.

Inspired by Roddy Lumsden’s 2015 Poetry School classes on the Tempest, it imagines Shakespeare’s Miranda, now a Queen. She is revisiting childhood experiences long after being freed from the magical isolation (twelve years, another level of lockdown) that her father had created with the help of others he held captive.

Kate and Jack struck lucky in their picture research when they found that the ‘song’ of a piping bee transcribed in the early 17c treatise on bees by Reverend Charles Butler has been recorded by the choir of Little St Mary’s, Cambridge. And they were delighted to be permitted to use the solo on the soundtrack.

When there was no stretch between the strand and Lower Marsh,

at dawn, perhaps, the senses tuned to river flow,

faint strains of a kind of blue, notes made before this place was Waterloo.

But chances are today – however close we hug the bank, or high we stand mid-river,

On the bridge attention flicks from seated gull to sidling crow to hissing 176.

The city plays its engines loud, thumping on until a break –

The sun is lifted from its oven, to be blown.

Red blob of glass, red bulb, balloon, it wobbles on a stem of light,

lets light trail down. Just as gold leaf is laid, brush tipped with grease, it shivers

as it flattens on the river.

Threads of gold snag on the drying wings of cormorants, Egyptians angled on a boat.

A lorry passes with UNUSUAL in giant lettering, a giant tweet.

As if to emphasise that sunrise is.

Published in New Walk 11, Winter 2015, Kate has two poems about watching the no mans’ land between the sea edge and Crag Path. There is also an interesting survey of what experienced poets have to say about their first collection, looking back. 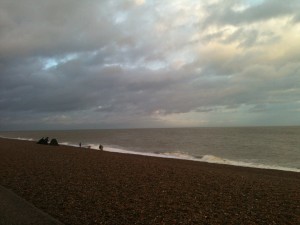 ‘At the Root of the Wind is Strife (according to Empedocles)’ has been Highly Commended in The Observances and will appear in the 2016 Forward Prize Anthology to be published in September 2015.