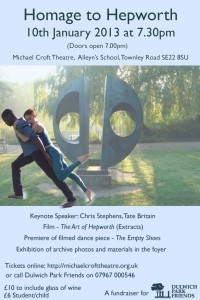 Performed at the Homage to Hepworth on 10th January, 2013, Kate’s poem profil perdu after Hepworth’s Two Forms Divided Circle, originally a sonnet, has been shaped and can be watched as it disappears, on the “profil perdu” page.

Thanks to Trevor Moore for the powerpoint from which the “code” was developed and to Herb Miller, who animated the poem.

This site uses Akismet to reduce spam. Learn how your comment data is processed.